ECPR is delighted to announce that the 2017 Lifetime Achievement Award goes to Joni Lovenduski, Anniversary Professor of Politics at Birkbeck, University of London.

Joni Lovenduski has been a visiting scholar at universities across Europe and in the United States. She has won the Isaiah Berlin Prize of the UK Political Studies Association, and is a Fellow of the British Academy and Academician of the Academy of Social Sciences.

A former member and vice chair of the ECPR’s Executive Committee, Joni Lovenduski has also served on the ESRC Research Grants Committee and the Research Council of European University Institute.

She has provided advice on enhancing the role of women in decision-making to the European Commission, and to the Council of Europe.

Joni chairs the board of Political Quarterly and is a board member of several other journals.

Among her many organisational efforts, Joni Lovenduski founded what is now the ECPR Standing Group on Gender and Politics – one of our largest Standing Groups. In 2009, she was the co-recipient, with Joyce Outshoorn, of that Group's Career Achievement Award.

Joni's two main research interests are political representation and how it affects the quality of democracy, and UK and EU equality policy. She is also interested in political recruitment and candidate selection; sex equality policy; equality machinery; gendering public policy; and gendered ceremony and ritual in parliament.

Joni Lovenduski has become one of the leading figureheads of the study of gender and politics in Europe. She is a source of inspiration, advice and support to many younger female scholars. 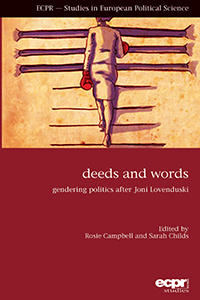 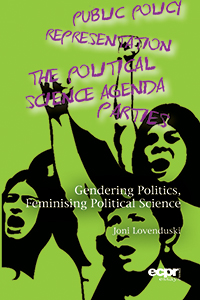 The jury recognises the crucial role that Joni Lovenduski has played in defining and developing the field of gender and politics within political science.

She has done so through many important publications, but also by devoting so much of her time to founding and strengthening organisations, and by representing the field in the wider political and public community.

Spanning more than thirty years, her pioneering research on the political representation of women, the selection of female candidates for elected office and the roles of women in political parties, has contributed new empirical data and advanced new conceptual frameworks and theoretical approaches, challenging the gender-blind assumptions of contemporary political science.

The widespread and seminal nature of her work is brought out in, among other things, two books published by ECPR Press: Gendering Politics, Feminising Political Science, and Deeds and Words; Gendering Politics after Joni Lovenduski.

Her research has also reached beyond the academy, influencing the recruitment strategies of political parties and, more generally, highlighting the role of, and challenges facing, women in politics.

Joni Lovenduski has made an outstanding contribution to political science in Europe and is a worthy recipient of the ECPR’s Lifetime Achievement Award.