Civil Society and Democracy: A Reconsideration 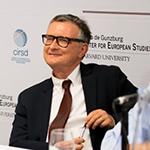 The idea of civil society resurrected in the 1970s has been one of the most important concepts guiding reflection on political transformations of contemporary societies. The general interest in the role and functions of civil society has evolved into a multifaceted research program across many social science disciplines that generated thousands of empirical projects and publications and engender analytical innovations and debates.

The dominant neo-Tocquevillian view posited a close affinity between the strength of civil society and successful democratisation and subsequent consolidation of democracy. Yet there is growing evidence that strong civil society is a necessary foundation not only for democratic but also for authoritarian rule. This implies that civil society can be mobilised for either liberal or illiberal projects or that it has a pillarised nature that can be politicised along the lines of prevailing political cleavages.

In this address I will discuss various understandings of the concept and the asserted role civil society has in shaping political and economic outcomes. I will contrast the established consensus on the role of civil society as a political project and a set of normative principles with disagreements about how civil society is defined and measured, how it evolves over time, what dimensions of politics and public policy it shapes and what are the mechanisms through which it affects the quality of democracy, resistance to authoritarianism and consolidation of authoritarian rule. In short, I will discuss what we have learned during the four decades of studying civil society and its relation to states and political regimes and whether it is time to give up this research program.

Grzegorz Ekiert is Laurence A. Tisch Professor of Government at Harvard University, Director of the Minda de Gunzburg Center for European Studies, and Senior Scholar at the Harvard Academy for International and Area Studies.

His current projects explore civil society development in new democracies in Central Europe and East Asia, state-mobilised contention in authoritarian and hybrid regimes, and patterns of political and economic transformations in the post-communist world.

Gregorz is the author or editor of six books, edited volumes and special issues of journals. His papers have appeared in numerous social science journals in the US, Europe and Asia, and in many edited volumes. He is also a Member of the Advisory Board of Wissenschaftszentrum Berlin fur Sozialforschung, External Examiner in Politics, Public Administration and Global Studies at the University of Hong Kong and Member of the Club of Madrid Advisory Committee.

Gender, Inclusivity and the Good Profession

The promotion of gender equality and inclusivity in political science is at a crossroads. While progress has been made towards gender equality and inclusivity in academia, a number of challenges remain to be tackled in order to achieve a good profession. On the one hand, awareness for a more equal profession has raised among the scholarly community and professional associations and a number of actions have been taken in this regard. On the other hand, systemic prejudices and structural inequalities remain across a number of aspects in the profession, including gender patterns in citations, collaboration on grants and publications, representation among gate-keeping positions and full professorships. In addition, political science has been experiencing an increasing level of external expectations for tangible outputs and impact. In some countries, programmes and research streams have even been placed under political scrutiny, including gender-related programmes. This Roundtable takes stock of the progress and remaining barriers towards equality and inclusivity in political science.

How can we foster change in academic gender relations?

What are the gold standards for a good profession?

What is the future of gender equality and diversity policy in neoliberal universities?

The Roundtable brings together speakers with extensive experience in studying gender and diversity politics in higher education, researching gender and diversity in hostile political environments, and with experience in running the academic publishing process and the potential gender bias and exclusionary practices it may involve. The participants come from a broad range of geographical and subfield backgrounds to stimulate a wide-ranging reflection on the responsibility of the entire political science community in moving towards the goal of an inclusive, gender-equal profession and simultaneously protecting scholars studying contentious topics from oppression.

The Roundtable addresses macro- and micro-level dynamics. In relation to the former, it explores how current transformations in higher education and the political environment affect the promotion of gender equality and inclusivity in the profession. On the latter, it is an opportunity to reflect on academic norms that privilege specific life choices and intersectional experiences of inclusion and exclusion.

We will not seek to come up with definite answers to what the 'Good Profession' is, but we will explore the implications of the topics for the future of political science.

Gabriela Pleschová University of Economics in Bratislava, and Convenor of the ECPR Standing Group on Teaching and Learning Politics (TLP)

We all like variety – not doing the same things all the time. We also appreciate novelty: if someone engages us in an enterprise that is positively surprising, creative and enriches our knowledge and experience. This is why students love classes that are different from what they have experienced before. Yet, designing a class that uses an innovative learning method is always tricky because of the inherent risks that students will fail to understand or appreciate the new method or will not learn well due to some unforeseen difficulty.

The purpose of this Roundtable is to discuss how institutions can encourage and support teachers to introduce new teaching and learning methods for the benefit of student learning. It aims to answer several central questions, including:

The Roundtable will gather a group of political scientists known for their role as innovators and supporters of colleagues’ innovations, along with educational developers whose role is to assist and guide teachers while improving students' learning experience.The Chair and Speakers will provide examples of teaching innovations from those included in Gabriela Pleschová's latest book (written with Agnes Simon, Masaryk University) and from elsewhere. The Roundtable should result in a publication in an academic journal.

Is the current far-right turn in Europe its new Zeitgeist, the radical transformation of political landscape, or just a temporary systemic crisis that soon will be overcome? It is highly problematic if the numerous and diverse cases of anti-establishment, radical right, far right, alt-right, extremist, anti-pluralist or anti-systemic parties can be all put under the umbrella term of populism. The fact that it is used in public discourse with excessive latitude and frequency doesn’t make the job any easier. It is even more precarious for the cohesion of academic debate itself, since the term provides a typical example of the essentially contested concept. Populism can be conceptualised as an ideology, type of political communication, specific type of political culture, mode of political claims-making, social movement, political rhetoric, political discourse, particular input into a political system, style of political mobilisation, etc. Such vagueness, in consequence, leads to problematic eclecticism in research on populism. Nevertheless, as Paul A. Taggart suggested, adopting contextual approach seems to be justified – different forms of populism are highly determined by the type of political system, political culture, social and economic conditions, time, and so on. If populism is treated as a 'dependent variable', more appropriate attention should be placed not only on its supply side (strategies and techniques of populist/anti-establishment parties) but also on demand, such as psychological dispositions, political sentiments or social attitudes of citizens.

These difficulties are just a few of the many faced when trying to capture the nature, scope and consequence of this democratic crisis in Europe. It involves answering (among many others) questions like:

Sustainable Development in a Contested World

Sustainable development aims to develop mechanisms that allow civilization’s progress without degradation of the environment and natural resources, while pursuing the socio-economic aspirations of contemporary and future societies.

The Roundtable will emphasise that such a division is not justified because it results in divided, partial implementation of these aspects in strategies and programs within public policies.

The Roundtable is built upon a holistic paradigm of sustainable development in the sense of simultaneous, collision-free implementation of all aspects of development leading to the wellbeing of societies. However, depending on the adopted axiological system and the level of socio-economic development, the paradigm and scope of its implementation is being contested. It therefore gathers representatives from all the research areas involved: