We are thrilled to announce that our 2021 Hedley Bull Prize in International Relations has been awarded to Lora Anne Viola, Freie Universität Berlin, for her book The Closure of the International System: How Institutions Create Political Equalities and Hierarchies (Cambridge University Press, 2020). According to our Jury, the book provides an 'outstanding' account of statehood and international organisations.

In light of this year's award having been presented to Lora virtually, we have created a short video to capture this special moment.

The Closure of the International System

As global governance appears to become more inclusive and democratic, many scholars argue that international institutions act as motors of expansion and democratization.

While international institutions facilitate collective action and common goods, the author’s closure thesis demonstrates how these gains are achieved by limiting access to rights and resources, creating a stratified system of political equals and unequal.

The coexistence of equality and hierarchy is a constitutive feature of the international system and its institutions. This tension is relevant today as multilateral institutions are challenged by disaffected citizens, non-Western powers, and established great powers discontent with the distribution of political rights and authority. 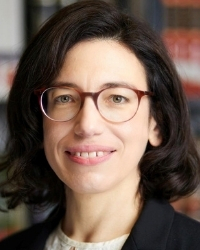 Lora Anne Viola is Professor in the Politics Department of the John F. Kennedy Institute at the Freie Universität Berlin. She researches and teaches global governance, international organisations, international relations theory, and US foreign policy.

In addition to The Closure of the International System, she is co-editor of Historical Institutionalism and International Relations: Explaining Institutional Development in World Politics (Oxford University Press, 2016) and has a forthcoming book entitled Trust and Transparency in an Age of Surveillance.

Lora's research has also appeared in numerous academic journals, such as International Studies Quarterly and Review of International Studies. Lora is a frequent commentator on US foreign policy and transatlantic relations for German and European media outlets. Listen to her most recent interview here.

In her own words

‘I am deeply honored to have been recognized with the 2021 Hedley Bull Prize. This prize is especially meaningful to me because The Closure of the International System, as the title implies, is in direct conversation with Bull’s seminal work and, as such, is a testament to the ongoing influence of Bull’s scholarship and the inspiration it lends to new ways of thinking about international relations. Thank you!'

‘The jury praised the book for the outstanding account of statehood and international organisations, and the global perspective and multiple themes that resonated with the legacy of Hedley Bull while retaining a contemporary relevance for students of global governance.

The panel acknowledged the book’s innovative approach towards the core idea of war and peace as mutually constitutive, and the comprehensive approach adopted by the author to take account of institutions, states, and different actors in the global governance system.’