We are pleased to announce that Thomas Poguntke has been re-elected as our Speaker of Council for his second three-year term, commencing 1 May 2022.

In his role, Thomas will oversee the work of our Council which is made up of one Official Representative from each of our Member institutions. The Council meets annually to discuss new plans with the Executive Committee and to hold it to account for its actions. 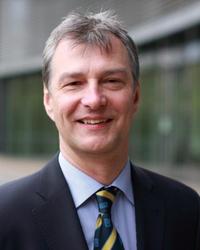 Thomas Poguntke is Professor of Comparative Politics at the Heinrich-Heine University Düsseldorf and Director of the Düsseldorf Party Research Institute (PRuF).

Previously, he held chairs at the universities of Keele, Birmingham and Bochum. He has also been a Visiting Fellow at the European University Institute in Florence and at the Australian National University.

Thomas is the author and editor of numerous publications on political parties and comparative politics including:

'I am delighted and grateful that I will be able to serve a second term as Speaker of Council of the ECPR.

I see my role as the liaison between the Executive Committee and the Member institutions and their ORs. So please get in touch if there is anything that needs to be raised, that could be improved or that should be changed.

ECPR has always thrived on the initiatives of its active members and I hope to contribute to this.'